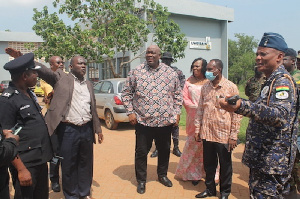 An alleged encroacher of the Council for Scientific and Industrial Research-Animal Research Institute’s (CSIR-ARI) 200-acre land at Frafraha in the Adentan Municipality in Accra was apprehended when the Greater Accra Minister, Henry Quartey, visited the property with a team from the Regional Security Council (REGSEC).

The visit was to ascertain the level of encroachment on the site and find ways to bring a stop to the situation.

The Ghanaian Times observed that encroachers had taken over part of the property and raised structures abysmally on it.

An alleged encroacher had even started “a footing” to raise a fence wall right in front of the CSIR-ARI’s Veterinary Clinic on the site.

The Greater Accra Regional Minister assured that the Regional Security Council (REGSEC) would go through the processes to ensure that the right thing was done.

He said this when he addressed the media after a visit to the property to ascertain the level of encroachment in Accra last Tuesday.

Mr. Quartey noted that the institute brought the matter before the REGSEC for assistance, for which reason the REGSEC decided to move to the site to see things for itself.

He stressed that it was sad people had the effrontery to move onto government property and build anyhow.

“A typical example is this one. It is supposed to be a veterinary clinic, and as you can see, people are raising a fence wall around it. I wonder where we are getting to,” he stated.

“So we have come to look at it. REGSEC will go back and meet, and we will make a decision, but in no time, we will inform you. But I foresee a situation that by the grace of God we will go through the process, and all these will come to CSIR-ARI,” he added.

Dr. Ebenezer Ansah, Director, CSIR-ARI, explained that the institute had 1000 acres of land but decided in 2017 to hedge about 200 acres of the land to stop the encroachment.

“But as we speak, they have come in and taken about half of that. So we are talking of about over 900 acres being encroached upon,” he added.

Dr. Ansah said the situation was putting the lives of their staff at risk and was greatly impeding their work because encroachers, who were mostly land guards, were armed with knives and guns.

He said the institute’s project of pasture varieties was destroyed while the veterinary clinic was no more patronised because of the situation.

The director of the institute revealed that they suspected one Nii Adjetey Obuobuo, who had said some time ago that he had an interest in the land.

“He had actually taken us to court, and our CSIR lawyer won a judgment against him. We believe that he also uses land guards to do these illegal activities.

Apart from that, we also know that the land guards are also selling the lands to the unsuspecting public,” he added.

Noting that he was hopeful the minister would see to the end of the situation, Dr Ansah indicated that the only way to solve the situation was to pull down all the structures to serve as a deterrent to others with similar intentions.