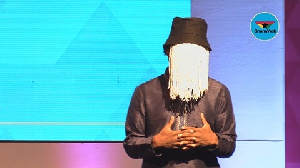 Article 19 Press Prize is an award scheme put together by the African Heights Foundation in partnership with an anti-injustice international organisation, the Open Society Initiative for West Africa (OSIWA). It is an annual award instituted to encourage journalists to shine a spotlight on the ills of the criminal justice system in the country where they practise to cause reforms.

The three winners are to receive the major honours for what the organisers describe as “their exceptional and compelling storytelling”.

Anas, in a message to Adeti, says: “You have told stories that matter to our democracy. The three of you are a shining light to Ghanaian journalism. Keep the fire burning. Allah bless.”

Anas also congratulated Beatrice Spio-Garbrah of the Media General (TV3) who won a special prize for the best female entry.

Adeti calls Anas his godfather and has been advocating that it is about time the Government of Ghana placed the image of former Secretary-General of the United Nations Kofi Annan and the image of Anas with his trademark mask on its currency and postage stamp for marketing Ghana to the globe in outstanding ways.

The winners will receive the awards by the close of the week in Ghana’s capital, Accra.

Previous Akufo-Addo’s State of the Nation Address time changed from 8am to 1pm
Next Senegal: Opposition leader released, more protest in the offing