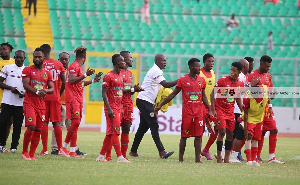 Ghanaian giants Asante Kotoko are one win away from winning the 2021/22 Ghana Premier League title after beating Medeama on Sunday.

The Porcupine Warriors who have been poor in their last few games returned to winning ways with a 2-0 win over the Yellow and Mauves at the Akoon Park in matchday 31 of the domestic top-flight.

Goals from Andrew Appau and red-hot Frank Mbella ensured Kotoko secured all points at stake to maintain the points gap between them and the Tarkwa-based club.

Kotoko had to play the entire second half with ten-men due to Mudasiru Salifu’s red card at the later part of the first half.

Despite playing with ten-men after the break, Prosper Narteh’s side never stopped fighting as they picked the maximum points to better their chances of winning the league title.

The win against Medeama means, Kotoko have the opportunity to win the league title in their next Ghana Premier League game.

Kotoko will travel to Accra to face Great Olympics in matchday 31 of the season. A win against the Dade Boys will propel the Porcupine Warriors to win the league with games to spare.

The Kumasi-based club have now accumulated 59 points after 31 matches.

Previous 15-year-old girl missing for nearly a year found after mother found videos of her on adult sites
Next I thank the Vatican for my elevation – Most Rev. Baawobr