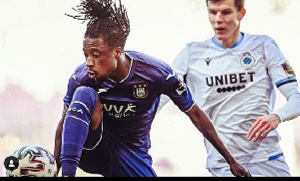 The Ghana Football Association has opened up on why young Anderlecht midfielder Majeed Ashimeru was not included in the Black Stars 27-man squad to face the Super Eagles of Nigeria.

According to the GFA, the player together with five others were forced out of the squad despite receiving calls up after sustaining injuries with their respective clubs.

It noted in a statement that the six injured players will not be available for the doubleheader against Nigeria adding that GFA will continue to monitor the recovery process of the players.

“The Ghana Football Association has sent its best wishes to six players who could not join the Black Stars squad for the play-offs against Nigeria due to injuries.

“Majeed Ashimeru, Antoine Semenyo, Baba Abdul Rahman, Samuel Owusu, Richmond Boakye Yiadom and Kamaldeen Sulemana were all handed call ups to the senior national team and were expected to report to camp on March 20, 2022 but failed to join the rest of the squad due to injuries at the respective club sides.

“Team Doctors of the respective clubs of the players wrote and officially informed the GFA of their injury situations and confirmed their unavailability for the double-header against Nigeria.

“The GFA will continue to communicate with team doctors of the respective clubs and monitor the recovery of the players.

“It’s the hope of the Association that injured players will recover quickly and join the senior national team for future assignments.

“As they continue their recovery process, the GFA remains firm in the belief that the players will join all Ghanaians to support the team in our quest to make a fourth appearance at the FIFA World Cup,” GFA said.

Former Black Stars striker, Asamoah Gyan, fumed over the exclusion of Majeed Ashimeru from the Ghana squad after the list was released on Tuesday, March 22.

Describing it as “nonsense”, the all-time Black Stars top scorer suggestively contended that the Anderlecht midfielder deserves a spot in the national team having ranked him as second-best Ghanaian midfielder.

“This guy @MajeedAshimeru is the best midfielder in Ghana, after @Thomaspartey22 PERIOD. I have kept quiet on this but this nonsense must stop. Smh,” Asamoah Gyan tweeted.

The senior national team will take on their Nigerian counterparts in a cagey encounter where the winner of the two-legs will book one of five African slots to the 2022 World Cup hosted in Qatar.

Black Stars will play their first leg at the Baba Yara Sports stadium on Friday, March 25, 2022 with the return leg expected to be played in Abuja four days later.

Tags Ashimeru DUE INJURY OUT to