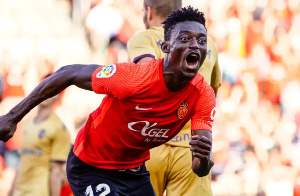 The 2-year-old Frenchman decided to join Aston Villa on a five year contract after departing the French giants on a free transfer.

He was chased by the Rojiblancos all season but it appears the allure of playing in the English Premier League for Steven Gerrard was too much to turn down.

Iddrisu Baba, has spent his entire professional career in football in Spain.

The 26-year-old player has accumulated 1,942 minutes spread over 26 games, and in the last stretch of the league he became an important part of Javi Aguirre’s plans.

Baba began his career in Spain at Leganés around 2014, playing in the youth division A. Later he moved to Mallorca B, and due to his good performances, he returned to the cucumber entity but to be part of the B team.

Nine months later he returned to the Bermellón team to the B squad, and in 2017 he landed at Barakaldo CF. The following year he returned once again to Mallorca but this time to stay in the senior team.

Although his team will play one more season in the elite division, the possibility of reaching Atlético is quite striking,

The appeal for playing for Atletico Madrid is too big whiles  in addition, he would have the opportunity to play in the Champions League.

The Ghanaian has a contract with the Majorcan club until 2024, and the player’s asking price is around 3.5 million Euros.