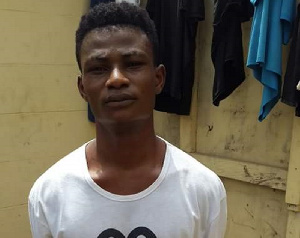 Pieces of Audio-visual recordings of Daniel Asiedu, aka Sexy Dondon the first accused person “reconstructing” the crime scene to the police on how he allegedly killed the late Member of Parliament (MP) for Abuakwa North, J. B. Danquah-Adu have been admitted in evidence.

The over five pieces of video recordings played in open court as part of the Evidence-in-Chief of the Investigator, Chief Inspector Augustus Nkrumah showed Asiedu, alias Sexy Don Don demonstrating how the life of the legislator was taken.

The late JB Danquah Adu, then MP for Abuakwa North Constituency was killed in his residence at Shiashie in 2016.

Daniel Asiedu, alias Sexy Don Don is facing the charge of murder and has pleaded not guilty.

He is also facing a separate charge of robbery while together with Vincent Bosso (2nd Accused) are facing the charge of conspiracy to rob which they have both denied.

In court on Monday, July 18, 2022, Chief Inspector Nkrumah, who is the eighth Prosecution Witness told the court that, some video recordings were made when the first accused person was being interrogated.

The videos he said were taken when Asiedu was sent to the crime scene for reconstruction.

“The recordings were done by the police with the police camera. That’s a camcorder during interrogation and same recorded and kept on pendrive as exhibits,” he told the court presided over by Justice Lydia Osei Marfo.

A crime scene reconstruction is a process of determining the sequence of events during and after a crime.

In the pieces of the video played in open court, the first accused person was seen on the video explaining the use of the catapult and the scissors retrieved from the crime scene.

While being led at the scene with investigators, the accused also said in the video that, the late MP died before he left the scene.

He also demonstrated how he entered the house through a window and how he saw the late MP lying on his bed.

He also told the court how he exited the premises after the incident.

Asiedu also demonstrated to the police at the crime scene how he picked up the mobile phone and how the man noticed him in his room.

The late MP according to Asiedu, held him tight by the neck and could not have his way but pulled the scissors in his pocket and stabbed him.

He also noted how he had a persistent struggle with the late JB Danquah Adu before he finally gave up the ghost.

He also pointed to where the late MP lay when he entered his room and knelt before the late MP’s bedside and offered prayers to God.

He also told the police about the iPhones he took away and how he searched in the room for some “documents” and “laptops”.

“I searched if I could get anything but I did not see anything. I took one of his shirts and wore it.

He also noted that he picked 3 phones from the room of the late MP and that, the mobile phones were (then) at Circle with a guy called Kwame.

Lawyer Yaw Dankwah, counsel for Asiedu while objecting to the tendering of the videos described the manner the recordings were taken and said the accused was “tortured” and “under duress”.

“We object to the tendering of these videos because the accused person was under duress and at all material time with at least 10 police officers on him…” he argued.

To buttress his point, Lawyer Dankwah pointed out to the court that, “one of the officers was at all time seen with his hands on a trigger.”

“He was tortured. He was not fed,” Lawyer Danquah observed. “There was no lawyer to represent the interest of the accused at the crime scene reconstruction.

Counsel said, his client was never given an opportunity to have a lawyer and described the manner as “inhumane.”

“He was treated wrongly. I am so disgusted. This is wrong.”

Sefakor Batse, a Senior State Attorney who represented the prosecution said, the pendrive played in open court was clearly what was disclosed during disclosures.

The Chief State Attorney also told the court that, the marks on his (Accused) neck as referred to by counsel are clearly marks inflicted on him during his struggle with the deceased.

She also contended that the accused had demonstrated how he had to use his head through the thorns to enter the house and so it is not surprising he had bruises.

“The witness in the box is the investigator who was seen in the video at all times and he had always all the time had his hands on the accused and he is the one putting this evidence in court.”

She said, the recordings are very relevant to “our case” and prayed the audio recording is admitted in evidence.

Justice Lydia Osei Marfo after listening to the argument overruled the Objection.

“Objection is overruled so far as it is the case of the prosecution that this evidence is relevant to their case,” the court said.

“The weight to put on it is subject to cross-examination by counsel of accused. It is within his right to rubbish this piece of evidence when he has his time during cross-examination,” the court noted.

Consequentially, the pendrive containing the said reconstruction of the crime scene was admitted in evidence and marked as “Exhibit S.”

The case has been adjourned to Tuesday, July 19, 2022, for continuation.

Previous Between 200 and 300 Ghanaians have been recruited by terrorists – Adib Saani claims
Next VIDEO: Racist Chinese filmmaker charged by Malawi court for trafficking