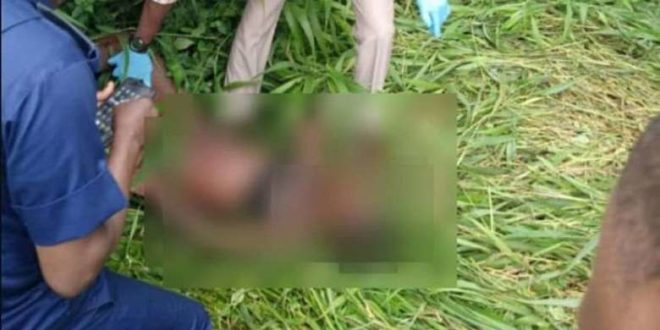 Baby wrapped in white cloth, placed in box and dumped in bush at Kwabenakwa

A day-old baby has been abandoned at Kwabenakwa near Obuasi in the Ashanti Region.

The newborn baby according to the Obuasi Police was found wrapped in a white cloth and placed in a paper box.

Unfortunately, the innocent baby was not found in the bush where he was dumped on time.

From the Police statement, the baby was already dead when he was found and has been deposited at the morgue for autopsy.

“On 7/09/2022 at about 1500 hours, Police in Obuasi had a distress call that someone had placed a day old baby in a paper box abandoned in a nearby bush at the roadside at Kwabenakwa.

“Police on receipt of the information proceeded to the scene and found a dead baby placed on a white cloth in a paper box. The place and the box together with the baby were photographed after which it was sent to the Obuasi Government Hospital Mortuary for preservation and autopsy,” parts of the police statement read.

Meanwhile, the police say efforts are underway to arrest the mother of the baby.

“Efforts are being made to arrest the woman who might have come to dump the baby there as informants have been engaged to assist the investigation,” the police statement added.