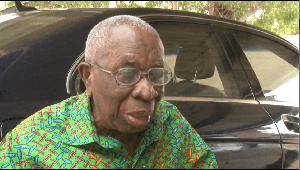 A former Clerk to Parliament, Samuel Ntim Darkwa says Speaker Alban Bagbin must not be blamed for going out of the country for constant medical care.

He however asked Mr. Bagbin to schedule his time properly to be available when critical legislative matters are being considered.

Speaking in an interview with TV3’s Komla Klutse on the happenings in the 8th parliament, he said “I knew him when he was in office and he was chairman of the subsidiary legislation and I had a great deal of respect for him at that time and I found him to be one opened-minded member, he behaved very well.”

He said regarding Mr. Bagbin’s medical trips that “Even before he became deputy speaker he was doing that then you can’t blame, that one we can’t blame him.

“All that we could say is that when crucial matters are going to be taken he must ensure that he is present at least for one day, his presence in the house is necessary. If consistently, they are going to take crucial matters and you are going for medical checks people might become suspicious about your intentions.

The Majority Leader in Parliament, Osei Kyei Mensah Bonsu, had earlier expressed disappointment in Mr. Alban Bagbin over the way and manner he conducted himself in Parliament last year.

According to him, the Speaker left Parliament to his home without communicating to the Second Deputy Speaker whom he handed over to during sitting on Monday, December 20.

He described this as unfortunate.

Speaking to journalists on Tuesday, December 21, the Suame lawmaker said “He said he will come here at 11: 30, subsequently another message came to say that he can only be here at 12. I mean, the house cannot be held to ransom by one person. It is most unfortunate.

“Yesterday leaving the seat he told the First Deputy that he was handing over to, that he will come back pretty soon and all that we heard was that he had left to his house, that is mots unfortunate without any further communication to the Second Deputy Speaker or me because I have been having some discussions with him and I am told today, that he didn’t even have any discussion with the Minority as well so where are we going from where. It is a most unfortunate development.”

Previous Is Nasty Blaq dating Yvonne Nelson?
Next ‘You’re old enough to be my father – Schoolgirl leaks WhatsApp chat of headmaster proposing to her