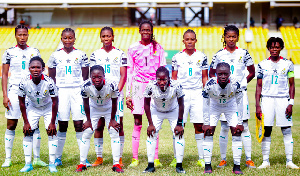 The Black Princesses managed to seal a 5-1 aggregate win after a three-nil first-leg win at the Abebe Bekila Stadium in Addis Ababa.

Protagonist Salamtu Abdulai netted a brace to make it a total of four goals against the same opponent in the two-legged tie.

After 25 minutes, Abdulai slotted a low shot past Ethiopia from inside the box after being put through by Cecilia Nyama.

Before the half-hour mark, the Ethiopians pulled one back.

The Black Princesses will join 15 other countries for this year’s tournament in Costa Rica.

The tournament will run from 10–28 August in two cities San José and Alajuela.