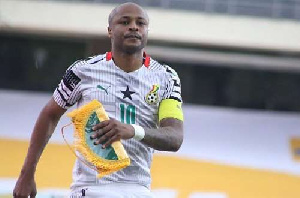 Black Stars captain Andre Ayew is expected to appear before parliament to answer questions regarding the Black Stars’campaign at the just-ended Africa Cup of Nations in Cameroon.

According to information available to GhanaWeb, The Parliamentary Select Committee on Sports has already written to the Ghana FA to facilitate Andre Ayew’s appearance before the committee.

It is yet to be known when the player will make himself available to face the committee.

It would be the first time in recent memory that a Black Stars captain would be appearing before the august house to answer questions after a tournament. The closest thing to it was when some members of the Black Stars were made to testify after the 2014 World Cup in Brazil when two players were expelled from the team camp due to disciplinary issues.

Ghana had a poor showing at the 2021 AFCON and lost to lowly rated Comoros in the last game to finish bottom of the group.

It is the worst performance by the Black Stars in AFCON history and that has already led to the sacking of Coach Milovan Rajevac who was in charge of the team at the tournament.

The poor performance by the Black Stars has led to requests by persons in authority to have an inquest into the reasons for the team’s failure.