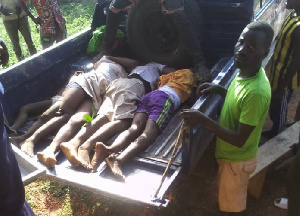 Black Wednesday for the people of Ankaase, a village in the Krachi West Municipality, where six students crashed to dead.

The students were on their way home after school on Wednesday, May 11, 2022 when they met their untimely death in a vehicular accident.

Source says the total number of students involved in the accident is seven.

One of the seven is reported to be in critical condition at the Krachi East Municipal Hospital.

Also, it took Police intervention to bring the situation under control. After the townsfolk decided to settle scores with the purported driver who allegedly caused the accident.

The driver is however believed to be on the ran.