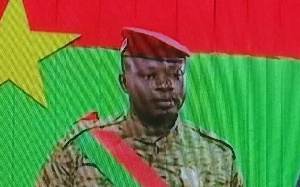 The military junta in Burkina Faso has approved a three-year transitional plan to prepare the country for a return to democracy.

A government committee had proposed a two-and-half year transition period, but the current duration means junta leader Paul-Henri Sandaogo Damiba will be in charge for 36 months before the next election is held.

The junta had been under pressure from the regional bloc, ECOWAS, to present a transitional plan.

Sandaogo signed a charter to that effect in the capital Ouagadougou, stating that it had been agreed upon after a national forum.

“The document says he will not be allowed to stand in elections scheduled for 2025,” the BBC Africa LIVE page noted.

Burkina Faso joins Mali and Guinea, as West African countries that have been suspended by ECOWAS and the AU following military takeovers.

Paul-Henri Sandaogo Damiba is the leader of the junta that overthrew President Christian Roch Marc Kabore.

Until his ‘rise’ to the position of coup leader, Damiba’s last held post as a Lieutenant Colonel of the army was head of security for the capital, Ouagadougou (the country’s third security region).

He had only been handed that post in December 2021 by outgone President Kabore in a move analysts said was to retain support of the military at the time.

From Ouagadougou security chief, Damiba was announced on Monday evening as leader of the junta known as “Patriotic Movement for Safeguard and Restoration, or MPSR.”