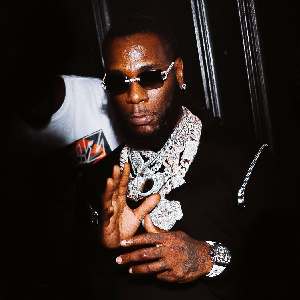 Nigerian singer Burna Boy has been accused of disrupting activities at a nightclub in Lagos.

According to several eyewitnesses who shared their experience on Twitter, the music star’s associates fired a gun inside a popular nightclub after an altercation with some other party-goers.

“Burna boy no suppose deh walk freely if Nigeria and Lagos police deh actually work, you commot gun for club shoot because you and your boys they fight people,” an eyewitness tweeted.

“And to the whole of Cubana group, y’all are bastards, that kind thing no fit actually happen for quilox shaaa, you go shoot person and escape freely, never.”

“Pussy ass they carry gun come fist fight! No level at all.”

Another eyewitness alleged that the music star’s team caused a lot of harm on the premises of the nightclub.

According to the eyewitness, the singer’s team destroyed his friend’s car while trying to leave the crime scene.

A close source to the music star told Pulse that he wasn’t directly involved in the ugly incident.

Pulse reached out to Burna Boy’s team and they refused to comment.

Previous Bobrisky dragged as he mistakenly shares document that proves his N450M mansion is rented
Next Council of State: Why pay ex-gratia to people when the president has so many advisers – Dr. Baah