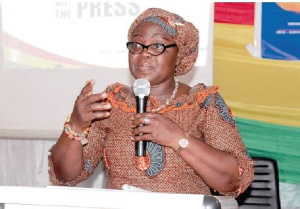 The factories which have been registered with the Ministry of Trade and Industry (MOTI) to participate in the 1D1F programme in the municipality are EKA Food and CHADOMA Company Limited.

The EKA Food Processing Company, located at Abesim near Sunyani, is processing vegetables into spices for the local market, while the CHADOMA Company Limited, also located in Sunyani, manufactures steel wool for the local and foreign markets.

Mrs Owusu-Banahene disclosed this at the assembly’s meet-the-press series in Sunyani and explained that the two companies were waiting for a bank facility to expand their production.

“The two companies are already in production but are waiting for a bank facility to expand their production,” she said.

The purpose of the meet-the-press encounter was to interact with the media on the performance of the assembly from 2018 to 2020.

Mrs Owusu-Banahene took the participants through some of the government’s flagship programmes and development projects which have been executed by the assembly from 2018 to 2020.

She also took the participants through social intervention programmes such as the presentation of working tools and equipment to Persons Living with Disability (PLWDs) and farm inputs such as cashew seedling and fertilisers to farmers.

The MCE outlined the assembly’s plans to clear heaps of refuse at the various dumping sites to keep the municipality clean.

Mrs Owusu-Banahene said a total of 2,077 people were trained in the Green Skills Project, an environmentally friendly livelihood programme implemented in 20 communities to create jobs and employment for women and youth in the municipality.

She said the beneficiaries were trained and supported in poultry and fish farming, organic vegetable production, beekeeping, rabbit, grass-cutter and snail rearing as well as afforestation.

She added that the economic development project was implemented by the assembly in collaboration with Plan Ghana and funded by the European Union to support residents with employable skills.

She again explained that 122 artisans made up of 109 females and 13 males were also trained in skills development such as mushroom production, soap making, fresh yoghurt preparation, detergent and bead making.

She said the assembly had procured hundreds of litter bins to enhance the door-to-service and instituted sanitation day clean-up exercises to promote cleanliness in the municipality.

She stated that a total of nine refuse dumps at Yawhim and Abesim and other communities had been cleared and the assembly had also provided household toilets for 13 communities between 2018 and 2019.

Mrs Owusu-Banahene, said the assembly had adopted strategies to improve revenue performance such as the enforcement of building regulations for the payment of permits, the serving of all demand notices by close of every month and improving the capacity of revenue collectors.

She explained that the assembly was also constructing market centres in some communities to improve trading in a bid to increase the assembly’s revenue.

Mrs Owusu-Banahene said the use of obsolete equipment by the assembly was affecting productivity and service delivery, especially waste management equipment.

She said there was pressure on the assembly’s internally generated fund (IGF) for waste management as the municipality continued to grow in terms of population.