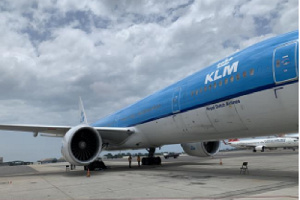 The Aircraft Investigation Bureau (AIB) has said it has been notified and has subsequently launched investigations into an incident that resulted in birds disrupting the engine of an aircraft before take-off.

The said incident which is known as a ‘bird strike’ occurred at the Kotoka International Airport was said to have involved a bird finding its way in the engine compartment of the Royal Dutch airline, KLM.

This subsequently led the airliner to cancel its September 3, 2021 flight from Accra to Amsterdam.

A statement issued by the AIB detailing the extent of the incident said, “Upon take-off RWY 21, there was a bird strike at 22:35 close to windshield. The Captain had to apply emergency brakes (high brakes).”

“Two tyres of the aircraft deflated and two other tyres got worn out but the incident resulted in no fire but only hot brakes. The aircraft was towed back to ramp (d1) at 23:21 hrs LT and all passengers were disembarked with no casualties,” the statement read in part.

As part of its investigation into the incident, the AIB said it will constitute an Investigation Team to probe the matter with a final report to be developed.

It added it will also request a number of reports from the following; the captain, the engineer, the Ghana Civil Aviation Authority and the Ghana Airports Company Limited.

“We will also request a record of bird strike incidents from GACL to analyse trends and provide safety recommendations as well as meet with Safety and Environment Department,” the AIB statement read.

The top 7 Ghanaian earners on the Ghana Stock Exchange