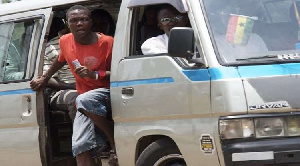 The Kumasi Metropolitan Assembly (KMA) in collaboration with all the transport unions in the Ashanti Region have begun distribution of specialized vehicle stickers to various commercial vehicles to avert congestion in the Region.

The move is to ensure that commercial vehicles operate within a confined jurisdiction in order to curb further spread of coronavirus (Covid-19).

Onua TV’s Nana Konadu Yiadom reported from some lorry stations in Kumasi on Tuesday that the drivers, led by their executives, were adhering to the social distancing directives that were much talked about by President Nana Akufo-Addo in his last address.

The Ashanti Regional Vice Chairman of the Ghana Private Road Transport (GPRTU), Sumaila Boakye, in an interview with Onua TV’s Maakye indicated that they register the drivers for free.

They take particulars such as names, telephone number, type of car and the name of owner of the car before the stickers are given.

Mr. Boakye said from Wednesday, May 13, every driver who doed not have the sticker will not be allowed to drive in the Region.

There would be barriers in Kumasi and other places to enforce this, he warned.

The GPRTU Regional Vice-Chairman urged passengers not to patronize commercial vehicles without such stickers and also be on the lookout for those who would violate the directives and report them accordingly.

He said those who do not have the stickers would be violating the rules.