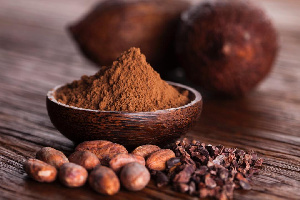 Ghana since 2016, has been controlling an average of three percent of global exports in the unsweetened cocoa powder trade, data from the Ghana Export Promotion Authority (GEPA) has revealed.

The inconsistent market share however contradicts Ghana’s gains in cocoa beans production, which currently stands at 20 percent globally – with Ivory Coast controlling 40 percent. In effect, more emphasis must be placed on the need to process cocoa into more value-added products for foreign exchange.

The top-three importers of unsweetened cocoa powder from Ghana over the last four years include the Netherlands, the United States of America, and China in that order.

Due to the general high quality of the country’s cocoa – low levels of bean defects – resulting in favourable flavour, low levels of debris, cadmium, and others, Ghana’s cocoa exports currently represent an average of about three percent of global exports for unsweetened cocoa powder.

Data from GEPA indicate that exports to Europe stand at US$54.382million, with the European market being the highest consumer of the commodity from Ghana.

With a deepened conversation on the need for more processing, Ghana has increased its cocoa processing in recent years – from 200,000 tonnes to 400,000 tonnes in 2019; but it mostly remains at the stage of semi-finished products. The major share of value in a chocolate bar is still generated abroad.

Currently, cocoa processing companies operate in an export zone with an incentive to firms that export a minimum of 70 percent of their products. The support given to domestic processing for export has been contributing significantly to the rise in Ghana’s unsweetened cocoa powder trade.