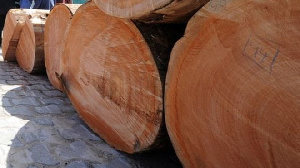 About six million rosewood trees have been cut down in Ghana for illegal export to China since 2012, an environmental group says.

The rare species, which takes 100 years to grow, is mostly used to make imperial-style furniture in China.

The report blames corrupt officials in Ghana for forging documents to allow the wood to leave the country.

Ghana’s information ministry has not yet responded to the BBC’s request for comment.

The Environmental Investigation Agency (EIA) said in a report that the illegal trade and felling of rosewood trees has continued despite a ban being in place since 2012 and which has since been tightened.

Ghana and other West African countries are the victims of China’s insatiable and unchecked demand for rosewood, the EIA said.

“Since 2012, over 540,000 tons of rosewood – the equivalent of 23,478 twenty-foot containers or approximately six million trees – were illegally harvested and imported into China from Ghana while bans on harvest and trade have been in place,” the group added.

The campaign group also said that logging was contributing to the desertification crisis in Ghana.

It called for the trade in rosewood to be suspended across the West African region and for China to comply with international agreements on endangered species.

Rosewood is supposed to be protected by Cites, the Convention on International Trade in Endangered Species of Wild Fauna and Flora, but the EIA says this protection is not enough.

In May, Gabon fired its vice-president and minister of forestry after 300 containers of kevazingo, also known as African rosewood, went missing.