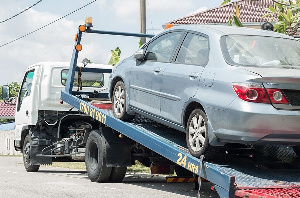 The Ghana Road Safety Authority (GRSA) has asked vehicle owners to brace themselves for the payment of a new road safety tow levy.

According to the Authority, the earlier Tow levy proposal did not work out because Ghanaians vehemently kicked against it.

Speaking to Francis Abban on Morning Starr Wednesday, October 20, the Director for Planning and Programs at the National Road Safety Authority (NRSA), Kwame Adonten said drivers would have to bear this new cost when they are going for Road Worthy Renewal at the Driver and Vehicle License Authority (DVLA).

According to him, new car owners would also pay when they are going for Road Worthy Registration adding that the Commission is considering the new payment to be between 5ghc to 150ghc depending on the type of car.

“This is to deal with cars that get broken down on our roads, sometimes for days thereby causing accidents. So the plan is to remove the risk. You are paying for the removal of the risk. Currently, only those whose vehicles break down are targeted. But it does not make economic sense.

“It is not going to be in Accra only. It’s a nationwide benefit for everybody. Any institution, any private sector that has the capacity to support will be given the opportunity. This time round we will do extensive consultations so that people can fully understand it so that we can win,” he added.

Mr. Adonten said the whole of November will be open for collation of all suggestions for the levy adding that private companies will be given all the necessary criteria for certification.

In 2017, Transport operators strongly kicked against plans by the government to increase road tolls in the country.

Deputy Finance Minister, Abena Osei-Asare, in June hinted that road tolls are likely to be increased to enable the government to embark on road infrastructure development.

She noted Ghanaians should be prepared to pay more taxes as the government seeks to embark on an aggressive domestic revenue mobilization drive to mitigate the negative impact of COVID-19 on the economy.

“The Road Fund for all intent and purposes was set up to receive money generated from the road tolls for the routine maintenance of our roads. But the government instead of using the money rather mortgaged the Road Fund and raised money for other things in the road sector instead of maintaining the roads.”

Related Topics:GHANAIANStow levy
Up Next