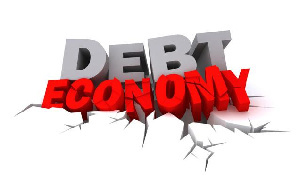 Ghana is running out of fiscal space as its debt-to-GDP ratio reached 74% at the end of 2020.

This figure is the highest in nearly four years, following early attempts to cushion the population from the impact of the Coronavirus pandemic.

The rise of the total public debt represents a year-on-year increase of 23.95% compared to the figure recorded period last year.

This development puts pressure on the government to slow down the rate of debt accumulation.

A breakdown of the debt numbers shows that the component of the debt secured outside the country remained relatively stable in the last two quarters of 2020, rising marginally (GH¢3 billion) to GH¢139.6 billion, and this is about 36.2 % of the total value of the economy which is projected to be about GH¢385 billion.

Meanwhile, the component of the debt secured locally has risen significantly in the last 2 quarters of 2020 (GH¢25 billion) to GH¢147.3 billion, representing 38.2 percent of GDP.

Government total expenditure for last year rose by 31.5% to hit a record GH¢92.2 billion due to the impact of COVID-19 but comes with a greater cost to the economy.

According to Fitch Solutions, the research arm of the international rating agency, Fitch, the huge increase in government spending as a result of the impact of COVID-19 on the economy, expanded the financing gap by far.

Fuel prices to increase by over 2 percent from next week

Commercial flights to Ho to begin in Easter