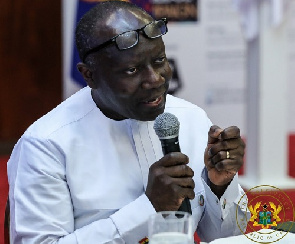 Finance Minister Ken Ofori Atta says government can only do little about investments locked up in financial institutions that promise unrealistic returns over a short period of time.

According to him, any organisation that promise a fixed return at the end of the month should be taken a second look at.

Speaking to Citi FM, Ken Ofori Atta said: “we as Ghanaians have to be wary of schemes that seem to generate excessive profit and it’s unfortunate that it cut across the society from the highly educated to the less literate all invested in it but when you look at the gold market and someone tells you they will give you 10% a month is quite clear it cannot be anything good and is our responsibility to also check whether such organisations have the appropriate licensing and how financial transactions are being done, so it’s a difficult lesson but their consequences in actions that we take, we hope that people will guide themselves.”

The information, which was in response to a question from one of the soldiers, reveals for the first time the extent of loss Menzgold customers have been exposed to after an undisclosed number of them bought into their business pitch of paying 7% to 10% returns on special gold collectables bought and deposited with the company.