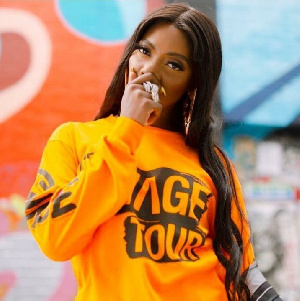 Popular Nigerian singer, Tiwa Savage has disclosed that she did not orchestrate her leaked sex video by herself.

Speaking in an interview on a New York-based radio station, she mentioned that she did not plan her sex tape leak for trend and even if she did so, she would have worn a nicer and sexier dress for the video and even shot a much clearer video.

“If it was it would have been a clearer much sexier underwear, I would have gone out loud, I would have made sure I was looking cute”.She said. She further disclosed that she couldn’t believe what had happened to her and felt sorry for her fans who would try to defend her on social media after they saw the posts.

“I can’t believe it’s actually happened to me like I feel for my fans, they have to me defending me, I can switch off my phone and let someone handle my account for me but they are going to see it and feel they have defend me”. She added.

She finally entreated her fans to ignore the post and commentaries on social media and continue to stream her songs and support her.

Court remands Shatta Wale, three others for a week over gunshot attack prank