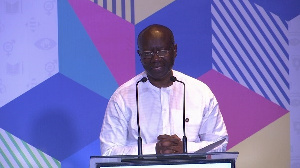 Senior Research Fellow at the Institute for Fiscal Studies Dr. Said Boakye has charged the government to be more diligent in the consolidation of extra-budgetary expenditure for better representation of Ghana’s macroeconomic data.

This comes on the back of the Finance Ministry’s insistence, that data shared with the IMF in accessing the recent Rapid Credit Facility, was not in tangent with the full fiscal year data.

The Ministry of Finance and Economic Planning in a statement responded to a publication by The Media Foundation for West Africa, via its Ghana Fact Check portal, that the Government of Ghana shared different economic data with the International Monetary Fund, and Ghanaians.

Senior Research Fellow at the Institute for Fiscal Studies, Dr. Said Boakye, says the Ministry of Finance, however, needs to practice better recording and reporting of extra-budgetary expenditure.

He said since 2017, the government has been incurring certain expenditures that it has not been recognizing in the fiscal accounting. IFS has in the past questioned the government’s labeling of such expenditures as extra-budgetary, saying it gives the government leeway to declare lower rates of fiscal deficit.

The Senior Research Fellow also cautioned the Ghanaian Government to be diligent in the spending of the funds accessed through the International Monetary Fund’s Rapid Credit Facility in light of the COVID-19 pandemic.

Previous Inflation rate for April rises to 10.6%
Next Pastor Love Responds To Claim That He Hired Robbers To Rape Obaapa Christy