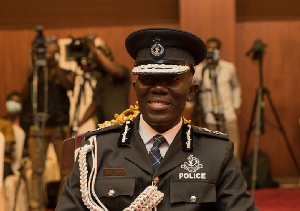 George Akuffo Dampare, the Inspector-General of Police is being hailed by some social media users following the arrest of dancehall artiste, Shatta Wale.

The IGP’s popularity has received another boost after Shatta Wale turned himself in and was subsequently held in custody by the police.

The police had been combing for Shatta Walesince late Monday, October 18, 2021, when news emerged that he had supposedly been shot by some unknown gunmen at East Legon.

The Police in a statement issued on the night of the event said that it had visited the home as well as hospitals in the capital but could not find any trace of Shatta Wale who was allegedly in critical condition.

Subsequent events and a confession by Shatta Wale led to the conclusion that the shooting story was a hoax.

Following the revelation, calls for his arrest heightened as some Ghanaians urged the police to deal with him for causing fear and panic.

This was after two of his camp members had been arrested by the police for making the publication about his supposed arrest.

The news of the arrest has gladdened the heart of some social media users who want him dealt with and be used as an example for others.

The IGP is also being praised for ensuring that the mantra ‘the law is no respecter of person’ makes meaning under his administration.