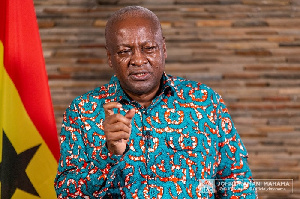 He said the government could have spent GH¢9 billion to save the banks rather than allowing them to collapse and to pay deposits of customers to the tune of GH¢22 billion.

In 2017, the central bank commenced a series of clean-up exercises in the financial sector.

The action led to the collapse of 9 banks, 347 Microfinance companies, 23 Savings and Loans Companies and Finance Houses, as well as 39 Microcredit Companies.

But speaking to a group of Ghanaians as part of his campaign activities ahead of this year’s elections, Mr Mahama said: “Financial institutions have been collapsed, Ghanaians money have been locked up… You needed GH¢9 billion to save those banks and financial institutions that collapsed but because of politics somebody decided to closed them down.

“Now Ghana is spending GH¢22 billion to pay the deposits of peoples whose moneys were lock up.

“What kind of sense is this? You won’t spend GH¢9 billion to save the banks but you pay GH¢22 billion to pay back peoples deposits and you can’t even pay. I heard the president say he has paid 98 per cent of the depositors. We should ask the depositors how have they received their money,?” Mr Mahama claimed.

Meanwhile the Governor of the Central Bank has said that most of the collapsed banks and financial institutions that became insolvent due to the financial sector clean-up exercise by the Bank of Ghana in 2017, were run by persons with ‘questionable backgrounds’.

According to Dr Ernest Addison, before the takeover of the collapsed banks, these resolved institutions had several deficiencies with little or no experience in running banks.

Speaking at a virtual conference organised by the GIMPA Faculty of Law on Thursday, August 6, the Governor said; “Some of them were set up overnight with little or no capital and by persons with questionable backgrounds with little or no experience in running banks. A common thread was that they were all managed or controlled by shareholders with complete disregard for prudential norms and best practices in corporate governance.”

He added; “It was clear that they were set up to get access to depositors’ funds to finance other businesses of shareholders or other related or connected companies. In the process, oligarchies were formed involving various groups of companies under the control of common shareholding aided by their relationship with political authorities”

No roads, no electricity to show for govts extreme borrowing – Mahama claims