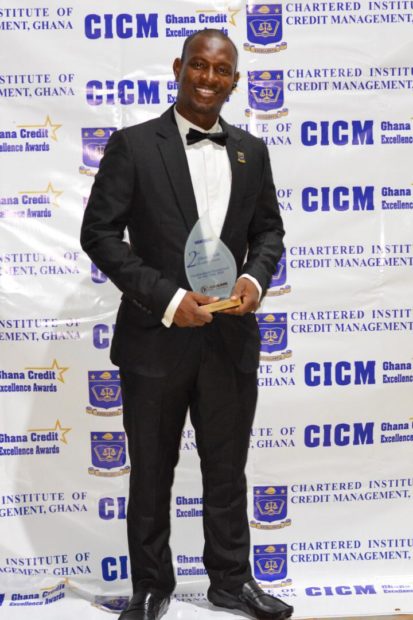 A non-bank financial institution in Obuasi in the Ashanti Region, Maglans Micro- Credit, has won the Microcredit Enterprise of the Year 2020 at the second Ghana Credit Excellence Awards.

The event—which came off at Tomreik Hotel in Accra on September 16, 2021,–was organised by the Chartered Institute of Credit Management-Ghana (CICMG).
It brought together several industry players The Special Guest Speaker for the occasion was the Director of Banking Supervision Department of Bank of Ghana (BoG), Mr Osei Gyasi.

Lanslord Asumakah, who is the Chief Executive Officer and Manager of Maglans Micro-Credit, and a Chartered Credit Professional, received the award on behalf of his company.

Speaking to DAILY Analyst in an interview on the sidelines of the awards, an elated Mr Asumakah intimated that the award showed the hard work and excellent service of his company, assuring that more should be expected from them.

On the number of branches, he said, his company was currently operating with Tier 4 of BoG license.

This, he said, does allow his outfit to open branches. He however, added that they were striving to get Tier 3 license which will pave way for the opening of branches.

“Our projection is to continue to serve the indigenous traders, the small medium enterprises and the informal sector that have not been catered for,” Mr Asumakah told our reporter. Maglans Micro-Credit Services is a non-bank financial institution registered at the registrar of companies and licensed by the BoG to give out loans.

The non-bank financial institution has BoG and Micro-Credit Association of Ghana as its supervising authority.

It is also committed to serving the needs of the informal, indigenous traders and small business enterprises who have been neglected and not catered for by the commercial and traditional banks.

It operates under BoG through the Micro-Credit Association of Ghana with operational license number ML/BOG/16/00405.

About CICMG
The Chartered Institute of Credit Management-Ghana has been running the award scheme since 2019. The maiden edition of the scheme was held in 2019 but in 2020 due to the impact of Covid-19, organisers had to put the event on hold.