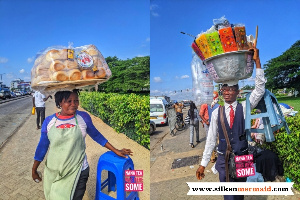 • The husband and his wife have become popular on social media

• The couple are usually seen around some traffic spots hawking together

• They go about selling a popular corn beer drink and bread

A married couple have become the recipients of public compliments after their model was shared on social media.

Living in Accra, the capital city of Ghana for the average citizen requires a sustainable source of income and the couple seem to have found their means in a business that has gained them public praise.

A Twitter user, @Sikaofficial1 shared a picture of the couple going about their business of hawking a local corn beer drink popularly known as ‘asaana’, and bread.

The husband, who carries the drink sharply dressed in suit and tie, is usually followed by his wife who also carries loaves of bread; a regular compliment for people who patronize asaana.

Pictures of the couple who are known to usually ply their trade around the heavy traffic areas of Shiashie, Dzorwulu, and East Legon, have become social media sensations receiving various commendations from the public.

See some social reactions to the couple’s business below:

Meet husband and wife who hawk asaana and bread for a living in Accra.

Bought some from them in East Legon… I didn’t know they were married. ❤️ https://t.co/dhXQvhPfUL

May the lord flourish and grow their business https://t.co/aa1F9FcIDV

This man is an epitome of greatness. He is not shy or allowing the gender differentiation deter him from supporting his wife. I love him for this. https://t.co/gtPIB1P7Bq

Source: www.ghanaweb.com
Related Topics:ACCRAasanaBREADhusbandWIFE
Up Next