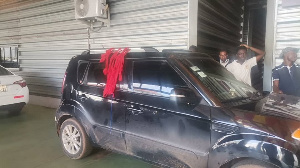 Traders at the new Kejetia market in the Kumasi Metropolis of the Ashanti Region on Tuesday, October 5, 2021, locked up the offices of management of the facility in protest of what they described as “unfair treatment”.

The agitation follows a decision by the management of the market to close down over 200 shops over unpaid Service charges.

Following the closure, the traders hoisted red flags on their cars and drove straight to the entrance of the management’s office blocking it in an attempt to prevent them from working.

Narrating the background of the demonstration to OTEC News’ Kwame Agyenim Boateng, chairman of the Concern Traders Association, Frank Antwi, said the leadership in early August 2021, directed all traders not to pay any service charge including electricity bills until the numerous challenges in the facility are resolved.

The move he added was borne out of the refusal of the managers to provide each store or shop with its own electricity meter.

The traders, however, came to work on Tuesday, October 5, only to find out that over 200 shops have been locked causing agitation among shop owners in the market.

Frank Antwi noted that traders at the new market have been paying exorbitant fees all in the name of service charges.

While describing it as a cheat, Kwabena Fosu, Operations Manager for Concern Traders Association said the huge service charges are as a result of the over 8000 shops using a single electricity meter.

He added that although the traders are ready to liaise with the Electricity Company of Ghana, and pay for the provision of individual meters, the board of the market is dragging its feet to sign the agreement for distribution and installation of meters.

On her part, the queen mother of the Cloth Sellers Association, Nana Yaa Boadu, called on the management and the board of the facility to immediately sign the agreement, else they will advise themselves.

Meanwhile, all attempts to get the manager of the market, Kofi Dufour, to get his side of the story has proven futile as he is nowhere to be found.