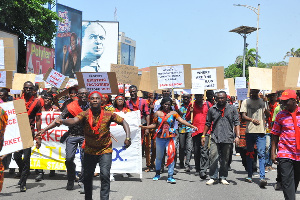 There is heightened tension at the Akosombo Industrial Company Limited formerly the Akosombo Textiles Limited as some disgruntled employees issue death threats over service conditions.

The aggrieved staff are asking management to immediately halt the 5 percent pay cut introduced in the wake of the COVID-19 pandemic or face their wrath.

In 2018 government secured private sector investment to revive the ailing company after taking over the ownership from the Chinese investors.

A video from the Free SHS secretariat suggests that the company’s fortunes have since improved with the printing of clothes for ceremonial activities of schools. Some managers of the company also revealed in the video that delays in the payment of salaries has now become a thing of the past. But the Concerned Workers of ATL are agitating over the non-payment of their Salaries for the month of September contrary to the claims of prompt payment of salaries.

In a strongly worded statement to the Police Commander, management, the local union and the Asuogyaman MP, the workers threatened some top managers including the CEO Kofi Boateng and the Factory Manager Ken Asare with death if deductions are not stopped.

They also issued death threats to the union leaders for failing to stop the salary deductions.

The disgruntled ATL workers are demanding payment of their 2019 bonus in cash and cloth as well as the payment of negotiated pay rise of 6 percent effective July 2019.

The said letter which was signed by an anonymous staff was posted to both management and union leaders who have since met the police as investigations begin into the death threats and agitations.