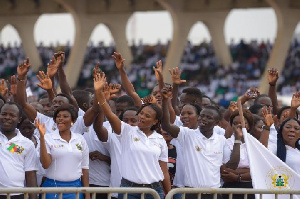 Editorial: The Future Of Nabco Trainees After October 2021

The three years contract for the trainees is nearly coming to and end , obviously the trainees have only a month to say good bye to the program what has the government has to payback for the sacrifice of these one hundred thousand trainees?

It will be recalled the authorities of the scheme have enrolled an exit plan for these corps, is it in the offing or the process may take some years to mature? Do the government have the capacity to absorb the trainees as promised by the President some few days ago? Will the Module Implementation Partners (MIP) facilitating the permanent jobs implementation doing it as the government/ trainees requires or the usual delay tactics? These and many other quizzes are believed to baffle the minds of the Trainees and Ghanaians as a whole.

On a more serious note, unemployment lapses in the Western African countries including Ghana has responded to insecurities as experts have been claiming, setting the records straight without mincing words, the Government/ IMP and other relevant stakeholders must sit in spite of the economic hardships and absorb every trainee whether recommended by his or her line manager, manageress or not .

“A single unemployed graduate is more dangerous than thousand armed robbers with raffles”, the italics are mine. This means the devil in a graduate unemployed youth can be risky since he is capable of influencing majority youth or people by the use of pen and other diplomatic tactics.

It will be painful moment for these trainees going home after the three years without getting absorb into the mainstream Job, perhaps there this African adage that ” a hungry man is an angry man” and the devil finds job for the idle hand”, however ,the government must take a calculated risk to absorb all the trainees to avoid any further concurrences.

However, it is well noted the populace that, both NPP and NDC promised the trainees to make them permanent during the 2020 general elections, more to it , the first gentleman of the land H.E Nana Addo Dankwah Akufo Addo made it papable clear with figures during his recent tour to some part of the country that his stewardship was going to absorb all the Nabco trainees. Adding to this, it will be very prudent for the NPP to absorb these desperate trainees if they want to break the eight, they should not forget these trainees can form several associations to hinder the win of the party during the 2024 general elections.

Nonetheless, the recommendation process for the trainees can be considered but the IMPs should not rely solely on them , simply because some line managers, manageress may have personal issues with some trainees in their respective offices , therefore, giving them requisite recommendation may be difficult, meanwhile the trainee might be effective in performance of his or her duties.

There have been several reports of trainee sabotaging trainees, line manager been it male of female fighting a trainee for one or two reasons, some may be issue of lust and many more, therefore the IMPs, Nabco Secretariat must not solely rely on the line managers or manageress before given the trainee an appointment letter.

The month of October which has been sit aside for the trainees to receive their permanent appointment letters must become a fruitful to them,they should not go out saddened but in a joyous mood , we appreciate the good jobs of the Npp government, the Nabco Secretariat and the other stakeholders.

Provide us with tags – Okada riders to government