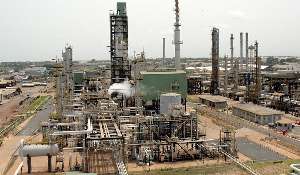 The Tema Oil Refinery is on the verge of total collapse due to an array of debts owed to some utility service providers in the country.

Key among them is the Ghana Water Company Limited GWCL; which has cut water supply to the refinery for close to one month now due to its (TOR) inability to pay accumulated water bills amounting to GHC4 million as at March 2021.

Our independent investigations into the woes of TOR revealed that currently, the company relies on its 11,200 cubic meters capacity water reservoir for its operations.

Water is a key component in petroleum refinery and its unavailability could pose a huge challenge to TOR’s operations.

According to our reliable sources, the reservoir could run empty for the first time in the history of the company in the next 72 hours if water is not restored. This they say could expose the refinery to greater danger because of the flammable nature of their operations.

“As we speak, because of the water cut to the facility, we are running on the reservoir of the company that has a capacity of 11.200 cubic meters for water. It will interest you to know that this reservoir has never gone dry but as we speak in the next three days, it will run dry if water is not restored. Water is an essential part of petroleum refinery and the fact that we do not have water means we are exposed to greater danger should there be any eventualities at the plant.”

It has also emerged that apart from water, TOR owes the Electricity Company of Ghana (ECG) to the tune of some GHC2.3 million Ghana Cedis in arrears.

Apart from utilities, investigations uncovered that the company also owes workers Provident Fund to the tune of about GHC34 million; a situation that has made it difficult for workers who are due to access their funds. Some workers complained of untold hardships that this has brought to bear on them.

“I was supposed to receive my benefit in December last year but it was not available. June 2021 will be the turn of another batch of workers to access their funds. The question we are asking is ; how is management going to make these payments when it is accumulated. We are really going through a lot as workers of TOR under this management, ” he fumed.

Additionally, the company is also said to be struggling to pay Tiers one and two of its workers’ Social Security and National Insurance SNNIT levies which is in arrears to the tune of some GHC21 million.

There are also concerns about the mode of recent appointments at TOR amidst its current financial predicament.

In a recent notice to its staff, the Human Resources and Administrative Manager announced the appointment of one Mr. Charles Anafi; a former Principal Engineer of the refinery as its new Optimization Manager- a position that did not exist in the past.

According to a notice to workers on the appointment, the HR and Administrative General Manager, Jane Ohenewaa Gyekye, indicated that the role of the newly created ‘Optimization Manager’ is to “commercially optimize the overall refinery’s operations, study market trends and recommend useful technology/ process to improve the refinery’s viability and commercial position to achieve the company’s revenue target.”

Documents available indicate that similar appointments have been made regarding over 10 workers including one Frank Kwaku Duah who has been appointed as the acting inspections Manager at the plant as recent as 12th March 2021.

This action by management has angered workers of the refinery.

“As we speak now, we are not working because most of our equipment are down and there is no crude; yet instead of using the meagre resources available to retool the facility, we are making matters worse.”

Our sources say refinery works have currently come to a total halt due to lack of crude oil. They say they suspect management has either terminated its contract with Woodfills Company Limited; a company that was contracted to supply 11 million barrels of crude to TOR, or it is on the verge of doing that.

According to the workers, this will further deepen the woes of TOR if the contract of Woodfills is abrogated.

On this basis, the TOR Workers Union have petitioned the president of the Republic, Nana Akufo Addo on a number of occasions over the alleged mismanagement of the state entity.

It is not clear yet what the president’s action will be. However, it can be confirmed that there is a growing anger within the workers of TOR over the MD’s continues stay in office.