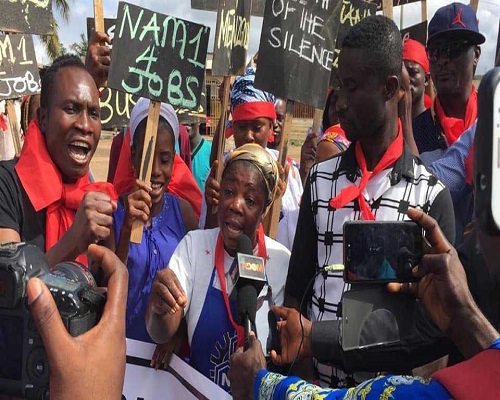 Some aggrieved customers of defunct gold dealership firm, Menzgold are disappointed in former President John Mahama for saying he didn’t promise to pay back their lock-up funds.

According to the customers, they had some hope when Mr Mahama promised to pay them but his latest comment on the matter has left them hopeless.

“I was really pained when I heard Mahama say he never promised to pay us,” leader of aggrieved customers of Menzgold in Kasoa, Superintendent Sampson Addai Mensah (Rtd) said on Asempa FM’s Ekosii Sen programme.

Rather, what his government will do should he win the December elections is to investigate the extent of indebtedness and take remedial actions to alleviate the suffering of the customers.

This position taken by the former President, the retired police officer said, amounts to deceit.

He said his members, numbering over thousands, were overjoyed when the NDC Communications Officer, Sammy Gyamfi confirmed Mr Mahama’s promise.

“I remember we held a press conference and declared support for NDC when he [Mahama] promised to pay,” Supt Addai Mensah (Rtd) fumed.

The former Police officer who claims to have invested all his retirement package in Menzgold said he now struggles to make ends meet.

“About eleven members of my family and some retired police officers have lost their investments and were hoping to get their monies back under Mahama but now, see,” he said.

Supt. Addai Mensah (rtd) said their only hope was for the Akufo-Addo-led government to pay them their monies.

Play attached audio above for more.