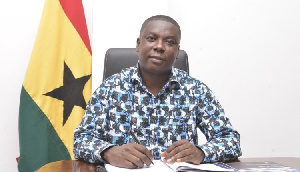 Businesses collapsed due to dumsor during Mahama’s reign – Boako

Dr Gideon Boako, Spokesperson of the Vice President Dr. Mahamudu Bawumia, has revealed that several businesses collapsed as a result of the erratic power supply (Domsor) during the Mahama administration.

He said on the Newsfile programme on Joy FM Saturday, May 9 that the dumsor occurred as a result of incompetence and mismanagement of the economy by former President Mahama.

He was contributing to a discussion on Dr Bawumia’s recent comments that the Mahama administration failed to tackle the ‘dumsor’ crisis well.

Dr Bawumia, on Monday, in a response to Mr Mahama’s comment that COVID-19 has sent the Akufo-Addo government’s oft-touted “resilient” and “robust” economy into the ICU, said President Akufo-Addo is a better manager of crises than his predecessor.

The flag bearer of the National Democratic Congress (NDC) had said in one of Facebook interactions with Ghanaians that: “Unfortunately, this government has used a lot of propaganda saying the economy has been the best that we have ever had since independence. Unfortunately, just one month of coronavirus the economy is in ICU. If we didn’t run to the IMF for the one billion rapid credit facility, it is possible that in the next month probably salaries would not have been paid and so our economy is on ventilators, and it needs thinking to rescue it from the ICU.”

But speaking at a media interaction after a COVID-19 response team meeting on 4 May 2020, Dr Bawumia noted that: “If you want to test the robustness of an economy, you test it in a time of crises. Thankfully, we’ve had two crises.

“The dumsor crisis, which crippled this economy for four years, what were the mitigating measures offered to businesses and individuals during dumsor which was an internally generated crisis?

He continued: “You look at the coronavirus crisis and you look at the difference in terms of what has happened. The President has reduced electricity prices, made it free for lifeline consumers, given free water to all Ghanaians for three months, has made sure there’s a stimulus package of GHS600 million for businesses and we have seen domestic production of PPE for our health workers.

“So, the difference couldn’t be [clear] during a leadership under the crisis of dumsor and under the coronavirus pandemic. So, I ask a simple question: Who will you trust in a time of crisis? The answer, I will say is very clear – Nana Addo Dankwa Akufo-Addo has shown leadership and concern for ordinary Ghanaians.”

“Fuel prices were increased at time that there were dumsor. People were losing their jobs and their income and they could not support their children’s education.

He further noted that the reactions of Dr Bawumia to Mr Mahama were appropriate.

“When u have political elements who had the chance to be with us trying to do all in their possible means with the gains made” it’s important that the wrongs are corrected,” he said.

Responding to him, a former Deputy Minister of Energy, John Abdulai Jinapor said: “The Mahama administration did a lot of things to support businesses and Ghanaians during the dumsor.

“We supported the pharmaceutical industry with 35m dollars,” he said among other things.

He added that: “We did not borrow as you are doing.”