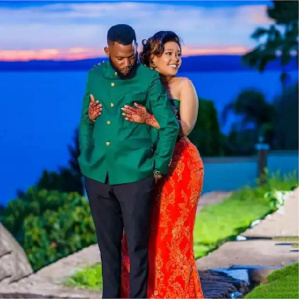 A 26-Year-old lady, Swalha Salum, who is also a popular makeup artiste was allegedly shot seven times in the head by her husband, Said Oswayo who is a successful 32-year-old businessman.

This was after the lady refused to pick up his calls when she went out to watch a football match.

The two got married on 31st December 2021 in a plush ceremony, but just five months later, their marriage ended tragically.

On May 28, 2022, Swalha Salum is said to have left home to watch a football game in Tanzania.

While she was out, her husband called her to find out where she was and when she was coming back home but she refused to pick up his calls.

According to unconfirmed reports, he texted her but she also did not reply to his text messages and that made the man upset, not because he was mostly concerned about her safety but felt she was cheating on him with another man as at the time she was away.

When Swalha Salum got home after the football match, she met her husband in a very bad mood.

It is unclear if they had issues the previous day but they began a quarrel after the husband questioned her about where she was coming from and why she refused to pick up his calls.

Although the lady explained to him where she was and why she could not pick his calls, the businessman did not believe her.

According to their house help and a younger sister of the lady, the couple took their heated argument which lasted over an hour to their bedroom and it was there that they heard the 7 gunshots.

After the man killed his wife, he took his car key and left the house after which the body of the deceased was discovered by her younger sister and house help.

Swalha Salum was rushed to the hospital but was pronounced dead on arrival.

As a Muslim, she was buried the next day even in the absence of her husband who was on the run as at the time.

After the burial of Swalha Salum, the haunt for the businessman began but just the next day after the funeral, the man’s body was found floating on the Rock Beach shore.

It was later noticed that he did not just drown, rather he shot himself in the mouth and fell into the sea.