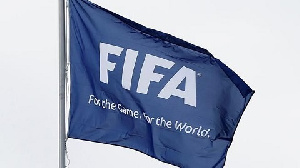 Feutmba disagrees with the verdict from FIFA

The ruling from FIFA is subject to an appeal
Former Cameroonian international, Roger Feutmba has taken a swipe at the Federation of International Football Association (FIFA) for rejecting South Africa’s petition against Ghana.

SAFA after Ghana defeated the Bafana Bafana by a lone goal through a 34th minute penalty goal of captain Andre Dede Ayew refused to accept defeat as they alleged them that the referee internationally cheated them.

However, FIFA on Friday, December 3 rejected SAFA’s petition for a replay against the Black Stars and declared Ghana as the legitimate winner of the tie.

An unimpressed Roger Feutmba said that the verdict rejecting South Africa’s petition against Ghana will send the wrong signal about African football.

“I’m not impressed with that verdict. Everyone saw what happened in Ghana. It is a shame what FIFA did and will send the wrong message about African football,” Feutmba told the Siya crew.

“I think they should’ve done more investigation into the matter. It is very unfortunate for Bafana Bafana and this decision takes African football backwards.

“This shows that African football belongs to certain region, it is not good for the game but it was expected because there’s something wrong in the leadership, especially when it comes to sorting out African football,” he told soccerladuma in an interview.

Source: www.ghanaweb.com
Related Topics:cameroon
Up Next