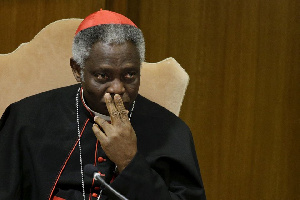 One of Africa’s prominent Cardinals, Peter Kodwo Appiah Turkson, has shared his thoughts on the current crisis between Russia and Ukraine.

In a series of tweets, the top Vatican official condemned the unfolding development between the two warring neighbours.

Cardinal Appiah Turkson called for a truce stating that “good judgment in making compromises” should be employed to broker a ceasefire.

“Our diplomacy & threats of sanctions did not help to prevent this barbarous war & the destruction of life & property in its wake. Let our prayers & good judgement in making compromises, not more arms, help broker a ceasefire & introduce peace for sorely tried Ukrainians & us all!” he tweeted on Thursday March 3, 2022.

He said such behavior being exhibited was ‘sinful and shameful’.

“This Russian-Ukraine war between Christians of the same confession is sinful & shameful. May it please God that the desired ceasefire talks are blessed to really take place, and that they bear fruit of lasting peace, harmony and mutual respect!,” Cardinal Appiah Turkson tweeted on February 27.

The former head of the large Vatican department known as the Dicastery for Integral Human Development also said the present war between the former members of the Union of Soviet Socialist Republics (USSR), was ‘ungodly’.

According to him, this is because there is a God-given natural likeness between Russians and Ukrainians.

Russia on February 24 invaded Ukraine, waging war on its cities.

The invasion according to international relation analysts is a result of Ukraine’s decision to join NATO which will allow ‘rival’ countries to establish military bases in their country – a move Russia opposes.