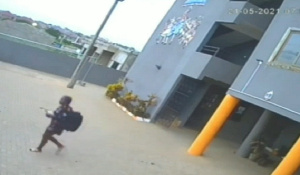 • Priscilla Tsegah was stabbed by her friend in a hotel

• Natashia has been identified as the prime suspect in this case

CCTV footage showing how the 23-year-old Priscilla Tsegah and her friend, identified as Natashia checked in a hotel for two days before she (Priscilla) was murdered has surfaced in the media.

The footage aired on Adom TV’s Ahosepe Xtra programme showed the two walking into the hotel building with the deceased in a backpack.

Later, only Natashia was seen walking out of the video in the dress the deceased wore on the first day they checked in.

She was seen wearing the backpack of the deceased.

According to the hotel management, it came to their notice that their room was locked after Natashia checked out.

This made the hotel’s room service use the spare key to access the room and to their dismay, found Priscilla in a pool of blood.

The body of the student journalist was found in the hotel room after her family declared her missing for days.

She was allegedly stabbed in her lower abdomen by Natashia.

Public Relations Officer of the Accra Regional Police Command, Deputy Superintendent of Police (DSP), Effia Tenge, has indicated that the room where the two women lodged has been locked for further investigations.