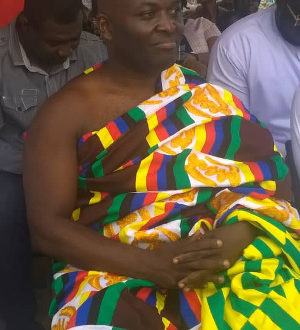 COKA as he is affectionately called turned the atmosphere of the Kuntanasehene’s maiden Adaekese on Easter Sunday 17th April 2022 to a different level as news about his presence broke out.

His presence quickly cut short a few cheers his opponent (Chairman Wontumi) was about to enjoy after he arrived a few minutes ahead of COKA.

Chairman Wontumi who arrived at the venue before the arrival of Dr. Yaw Osei Adutwum, the MP for the area who doubles as Education Minister and District Chief Executive (DCE) for Bosomtwe, Joseph Assuming had to take cover and join the Minister’s entourage to enjoy cheers upon seeing the fans of COKA.

When the Minister and his entourage moved ahead during the greetings of participants leaving Wontumi behind to pay homage to invited chiefs, he could only be seen getting waves back after he stretched his hands to greet the people.

Occasionally, one or two of his relatives show up and embrace him to welcome him home.

But to the surprise of many, Chairman Odeneho who is not from the area was mobbed at the same durbar grounds of Kuntanasehene’s Adaekese held at Kuntanese, the district and constituency capital of Bosomtwe.

Dressed in his rich Kente cloth to honour an invitation extended to him by Barima Ogyeabour Amankwaah Adunan II, the paramount chief of Kuntanase Traditional Council, COKA who is currently incumbent chairman for Kwabre South and chairman of the Association of chairmen in the Ashanti region overshadowed his main competitor in the NPP chairmanship race, Bernard Antwi Boasiako aka Wontumi who also hails from the area.

Many residents were surprised how COKA could attract fans to the backyard of the incumbent regional chairman and even donate Five thousand Ghana cedis in support of the Omanhene’s palace project.

A number of them who spoke to the media commended COKA for showing leadership and maturity by honoring Omanhene’s invitation at his main competitor’s backyard and also donating GHC 5,000 in support of the palace project.

According to them, this was the kind of leadership “we need to move the region forward devoid of one’s background.

Many political watchers got their predictions right that COKA’S donation would force his competitor who is also a native of the area to go the extra mile in terms of donation.

Chairman Wontumi before making his donation public personally begged Omanhene and his elders on behalf of the grandsons of the Chief pleading that they wouldn’t abandon him (chief) and his elders but would support his good initiatives.

He, therefore, pledged to support the project with Ghc100,000.