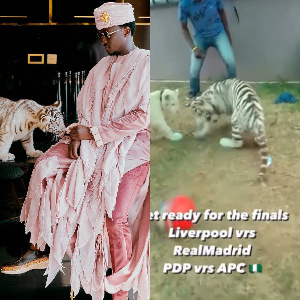 A video shared by Nana Kwame Bediako, popularly known as Cheddar or Freedom on Instagram captures his two tigers playing football with their trainer.

It was an interesting sight to behold as the cats chased after the ball. At the command of their trainer not to touch the ball, they heeded.

The video follows an uproar by members living in the same neighbourhood as the millionaire.

On May 20, 2022, some residents at Wonder World Estates, Avenue Lincoln near the British High Commission at Ridge expressed reservations about the wildcats brought into the country Cheddar.

They asserted that the presence of the seven-month-old tigers put fear in them and created a repugnant smell in the area.

The Daily Guide newspaper quoted one of the residents to have said “the animals stink. Those animals are held inside an apartment where there is no access to proper fresh air. As soon as the door is open, you sniff a strong unpleasant smell emanating from them”.

But addressing the matter in an interview with the press, Mr Bediako alias Cheddar said he had no intention of using his wildcats to create fear and panic.

On the contrary, he said the tigers will serve as a tourist attraction which will boost the local industry.

The Director of Operations at the Wildlife Division, Luri Kanton after visiting the estate also said the big cats pose no threat to the residents.

“We have made the visit to look at the tigers to look at their conditions, the cage they are put in and then we want to assure the general public that the tigers are well secured in this cage and our investigation also reveals that so far, their welfare too is being catered for,” he told the media.

Meanwhile, the Ghana Police Service has stated that it will, in collaboration with the Wildlife Division of the Forestry Commission, be relocating the cubs from Freedom Jacob Caesar’s Osu residence.