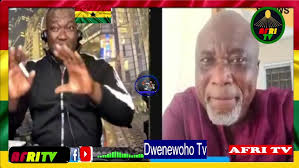 Owusu Bempah is founder of Fixing the Country Movement

Somewhere within the week, reports went rife on social media that pro-government movement Fixing the Country had been hit with mass resignation.

The rumour was a result of some screenshot of a conversation from the group’s WhatsApp platform going viral on social media.

In the said conversation, a key member of the group, Hopeson Adorye, announced his resignation from the movement citing self-aggrandizement on the part of Ernest Owusu Bempah, the founder of the movement.

In a latest interview with pro-New Patriotic Party social media commentator, Daddy Fred, Hopeson Adorye corroborated the contents of the screenshot indicating that it was indeed a chat from the Fixing the Country Movement platform.

Hopeson Adorye explained that the movement was founded by the Head of Corporate Communications for Ghana Gas, Ernest Owusu Bempah, and that the founder brought him and others onboard to help with the course of the group.

According to the 2020 NPP parliamentary candidate for Kpone Katamanso, the movement which was set up to propagate the ruling government and counter critics of the government has turned into a one-man show.

“It was Owusu Bempah who formed that group and brought all of us onboard. He is the convener. We have done a lot of work but we think the whole thing is becoming self-centered, it was some sort of self-aggrandizement.

“It was turning out to be a one-man show and we said no, we won’t let that happen,” he stated.

As a means to manage the situation, Hopeson Adorye stated that they called for a reformation of the group but have been resisted by Owusu Bempah who claims the group is his intellectual property.

He thus went on to list some key officials of the group who have since resigned as a result of this development.

The names include Bono Regional Chairman of the NPP, Kwame Baffoe (Abronye DCE) and former Communications Specialist at the Ministry of Business Development, Kwame Twum Boafo.

He noted that the disgruntled group including himself have since gone ahead to form a new group they are calling Fixing the Country Ghana.

Fixing the Country Movement emerged when some Ghanaians on social media started a campaign dubbed ‘Fix the Country’ to impress on the government to address pressing concerns of the citizenry.

Fixing the Country Movement in their case countered Fix the Country saying the government was already on course in addressing the concerns of Ghanaians.

Listen to Hopeson Adorye confirm his resignation from Fixing the Country Movement below:

Source: www.ghanaweb.com
Related Topics:#FIXTHECOUNTRYConfusion
Up Next

VIDEO: This story of two missing coffins from a carpentry shop in Kumasi will shock you