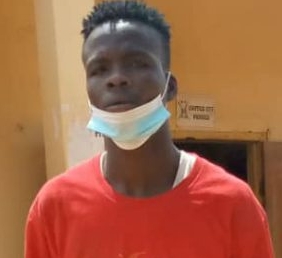 The sentence was handed to him by His Worship, Andrew Prince Cudjoe, for possession of a stolen unregistered Apsonic Aloba motorbike valued at GHS 4,800.00.

The prosecutor in the case, Chief Inspector Sina Benah, briefing the court, said that nearly two months ago, the complainant (name withheld) was robbed at a gunpoint of his new motorbike and Infinix smartphone valued at GH¢600.00.

On September 3 at about 4:00 pm, the complainant spotted the accused person with an Apsonic Aloba motorbike with registration number N-21-NR-9579 which is similar to his which was robbed at Dollar Power Road.

After careful examination, the complainant concluded that the motorbike was his stolen one, as he was able to identify an unusual mark on its handle.

The court heard that a confrontation ensued and the complainant brought out his spare key which fitted perfectly.

Suspect Aziz, who claimed the motor belongs to one Abubakari, alias Judler, attempted to flee the scene, but he was nabbed after the complainant raised an alarm.

After police interrogation, both the complainant and Mr Aziz were asked to provide documents on the motorbike. Mr Aziz brought out fake documents which he said were handed to him by the said Abubakari.

The complaint, on the other hand, gave in an original document and a receipt from the company where he bought the motorbike.

It was also revealed that suspect Aziz was an illegal mining (galamsey) operator before he was put before court.

He pleaded guilty to the offences and was handed 18 months imprisonment sentence.

The main robber, Abubakari is at large.