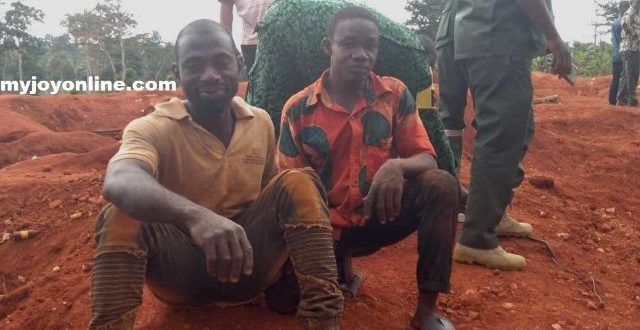 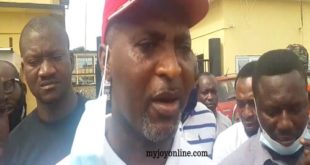 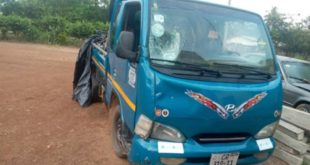 A combined team of police and Forestry Commission has arrested two illegal miners who have been operating in the Desiri Forest in the Mankraso District in the Ashanti Region.

Kwabena Yeboah, 42 and his 41-year-old accomplice, Akwasi Yeboah were arrested in the process of mining for gold in Compartment 89  section of the forest on Friday.

The suspects were among a group of illegal miners who had invaded the 150.95 kilometre reserve and were busily mining gold in that restricted area.

Many of the illegal miners who invaded the forest took to their heels upon seeing the security team and escaped arrest. Luck, however, eluded Kwabena and Akwasi who were inside deep pits they had created.

The team seized motorbikes belonging to the illegal  miners

This is the second time in three months the joint police-forestry team has arrested illegal miners operating in the Desiri Reserve.

The Tepa Circuit Court presided by Johnson Abbey in May this year slapped a total of GH₵12,000 fine on four illegal miners who were arrested at the Asuakaw section of the forest.

District Forestry Manager, Godwin Agyemang tells Nhyira FM they believe that Desiri Forest Reserve which is believed to be rich in gold deposits, has become target for the illegal miners.

“They [illegal miners] believe the reserve is rich in gold deposits hence the mad rush to mine in the restricted area,” he said.

“The miners have been sent to the Tepa Police station where their statements were taken. We as Forestry Commission have also given our statements to the police. They would be arraigned on Tuesday,” Mr. Agyemang added.

Mr. Agyemang says until the courts prescribe hefty fines or stiffer punishments on convicted illegal miners, more people could be attracted to the illegal activity in forest reserves.

“Some convicted miners were fined by the court earlier this year. It is my fervent prayer that the courts will put hefty fines on all those convicted for illegally mining in the forest reserve. This will deter more people  from mining in the reserves.”