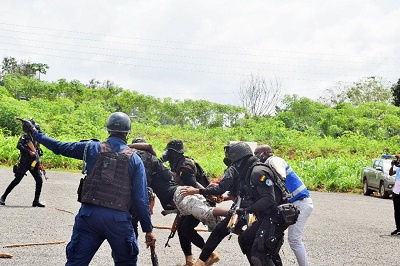 Two miscreants were yesterday arrested by personnel of the Special Weapons and Tactics (SWAT) unit of the Ghana Police Service, for their attempt to disrupt a simulation voting exercise in Ho, yesterday.

The SWAT team arrived swiftly at the scene amid warning shots when one of the trouble makers was trying to vote with a fake voter identity card and the other was seen carrying the ballot box away.

The simulation exercise was held during a day’s working visit to the Volta Region by the Inspector-General of Police, Mr James Oppong-Boanuh.

Briefing journalists later, the IGP warned that any individual or group whose unruly character would disrupt the forthcoming general election will suffer quick and ruthless consequences.

Mr Oppong-Boanuh said that the Ghana Police Service was collaborating vigorously with other security agencies to ensure that no untoward incidents occurred during the elections, adding that the army was ready to support in the area of rapid response.

He gave the assurance that there would be adequate deployment of security personnel before, during and after the elections, in the Volta Region and other parts of the country.

Mr Oppong-Boanuh entreated the citizenry to contribute to the success of the elections by refraining from lawless acts.

“It is the duty of the police to ensure law and order in the country and trust that the Ghana Police will not compromise on the role,” he affirmed.

The IGP said that anyone who had any form of electoral or other grievances should channel them through lawful processes without disrupting the peace.

“The police and other security agencies are set to deal with any situation as we head for the polls, and any identified troublemaker will be faced squarely and taken through the full rigours of the law,” he added.

The IGP earlier paid a courtesy at the Asogli Palace at Ho-Bankoe.