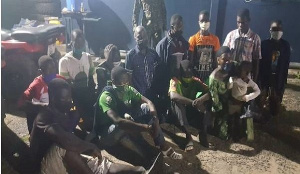 A total of about 36 persons, mostly foreigners, have been arrested by the Western Regional Command of the Ghana Immigration Service (GIS) for allegedly using unapproved routes to either enter or exit the country.

While some of the suspects had been quarantined, others were escorted back to their countries.

According to the Regional Public Affairs Officer of the GIS, Assistant Inspector Moses Manford Akakpo, on Tuesday, May 12 at about 6:45 pm, a team of immigration officers on their usual surveillance prevented 12 Burkinabe and a Ghanaian from using unapproved route at Nzentenu in Half Assini in the Jomoro District.

He said but for the swiftness of the patrol officers and the cooperation of some community members, the stubborn travellers could not have been intercepted.

Investigations revealed that the suspects were unrelated but arrived at Nzentenu community almost at the same time.

He said their samples had since been taken and the suspects put under quarantine, awaiting results.

He indicated that the results would eventually inform the next line of action by the Jomoro Municipal Security Council.

The following day, at about 10:30 pm, 11 Ivorian nationals were also intercepted at Berlin, an unapproved entry point near Newtown Border Post in the Jomoro Municipality.

He said they had since been escorted back to the Ivorian security.

He said 12 other ECOWAS nationals were also refused entry at Appolenu unapproved entry point in the municipality on the same day.