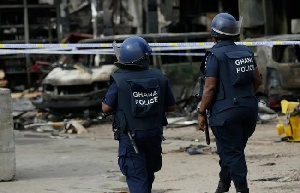 Five persons have been arrested in Nsawam-Adoagyiri for possessing several guns, ammunition, and other offensive weapons without a license.

The suspects were arrested along the Nsawam road by a patrol team on the evening of Monday, October 11, 2021.

According to Rainbow Radio’s Prince Collins Bening, the suspects who were driving an unregistered Mercedez Benz were stopped by the patrol team.

The patrol team interrogated them but realized the suspects became jittery and also suspected them of hiding something.

A search was conducted in the car and the patrol team discovered several guns, ammunition, and other offensive weapons in the car.

The suspects our reporter noted could not explain where they got the guns and other weapons from.

They are currently in police custody assisting with the investigation.