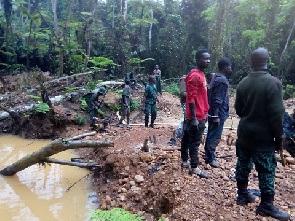 Fifty-nine foreign nationals from neighbouring African countries have been arrested by a team of police and Immigration officers at Adum Banso in the Mpohor district in the Western Region.

She stated that the suspects were mainly engaged in surface mining using a device to detect gold in peoples’ farms without permit from the district assembly or license from respective agencies.

Empire News gathers that some farmers were nearly lynched by the suspects after they discovered they were mining illegally in their farms.

Chief Superintendent Henrietta Ampabeng who is in charge of enforcement , on her part revealed that the suspects were arrested following vital information from the residents after monitoring their illegal operations in the Mpohor district and further added that most of the suspects had no proper travelling documents such as passports after their initial investigation. The suspects are between the ages of 20 and 37.

The Mpohor district is one of the areas hard hit by the illegal mining menace.