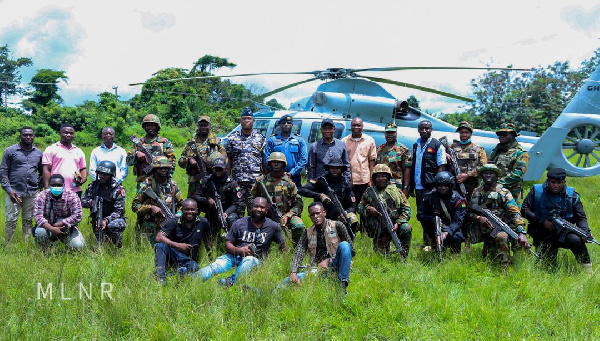 The government’s onslaught on illegal mining continues with the Deputy Minister in charge of mines, George Mireku Duker, leading a security taskforce to shut down an illegal mining site in the Birem North District of the Eastern Region on Thursday, September 30, 2021.

George Mireku Duker, who is on a two-day monitoring tour of the Operation Halt II taskforce in the Eastern Region, led the joint security team to storm the mining site and arrest some seven persons who were found to be engaging in illegal mining activities.

The Minister and his entourage of security officials also decommissioned 19 changfans and other illegal mining equipment found on the site.

Hon. Mireku Duker lamented the hard-heartedness of the illegal miners and chided them for breaking the laws with impunity.

Mireku Duker warned that, government’s fight against illegal mining is in full swing and that the seven suspects will be prosecuted to serve as deterrent to others.

George Mireku Duker also made the revelation that some lives have been lost at that particular mining site and that, authorities have served the firm several warnings to stop operating.

Mireku Duker said that like every Ghanaian, he is concerned with the continuous degradation of the forest and water resources of the country.

The Member of Parliament for Tarkwa Nsuaem made the averment that the crackdown on illegal mining is going to continue until the government and Ghanaians are satisfied with the state of our water resources.

“It’s very worrying that Ghanaians are drinking from diverted water that has been polluted by mercury. Farmers are also complaining that their farms are being destroyed. The Pra River has been diverted and polluted and I believe it’s time for all Ghanaians to come on board to help fight it. We cannot fight it alone. All hands must be on deck to fight illegal mining.

“I’m happy the security apparatus is helping us and I’m calling on all Ghanaians to be alert and help fight this. These people are going to be prosecuted and we are going to continue unabated.

George Mireku Duker is on a two-tour of the Eastern Region to have first-hand information and experience of the operations of the anti-galamsey taskforce Operation Halt II.

The visit will see him stage unannounced visit to some mining sites as well as waterbodies in the region.

Related Topics:arrestedIllegal minner
Up Next