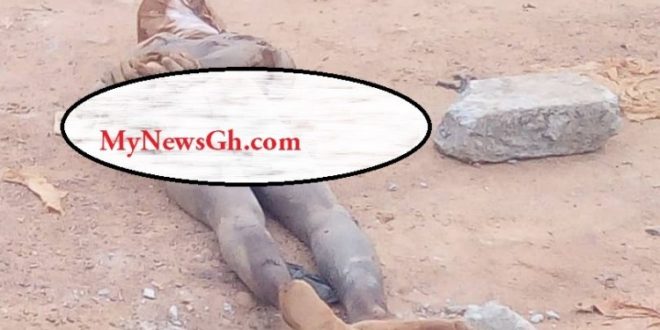 A suspected armed robber has been tripped naked and stonned to death unknown assailants at Amanfrom a suburb of Kumasi in the Ashanti Region, MyNewsGh.com reports.

The unfortunate incident which occurred on Saturday dawn has left residents in a state of shock after it was discovered the deceased was blindfolded before being hit by the cement blocks.

His body was discovered on by the residents who were going to market early on the early hours of Saturday April 20.

MyNewsGh.com reporters as at press time were not able to tell what the deceased stole which led to his untimely death except to say he is a suspected armed robber who is not known to them.

According to them, the community has recorded such cases since last two years.

The residents are however appealed to the Ashanti Regional Police Command to heighten patrols in the Amanfrom community and its environs.

The body of the deceased has since been taken away by the police officers who came to the scene.