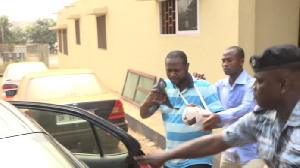 The Asokwa District Court has issued another warrant to arrest Belinda Awuku, wife of the man accused of murdering a 46-year-old woman in a Kumasi hotel.

This was after the suspect, Belinda Awuku, failed to appear before the court today, [Thursday, May 28, 2020].

She was remanded on two occasions by the court, but subsequently moved to a High Court in Kumasi for bail.

Inspector Ankrah who held brief for prosecution Chief Supt Kofi Blagodzi drew the court’s attention to the development and further prayed the court to issue a warrant for her arrest.

The court presided over by H/W Rosemarie Afua Asante granted the request and adjourned the case to June 29, 2020.

Counsel for the suspect was also not in court.

Her husband, Edwin Awuku, who is the key suspect in the case is still in prison custody due to the Covid-19 pandemic.

The couple is standing trial over the gruesome killing of Comfort Owusu Afriyie a 46-year-old restaurant operator at Asafo, in Kumasi.

Afriyie was last seen on New Year’s Eve but was confirmed dead the following morning at the Cedar Crescent Hotel in Kumasi, the Ashanti Regional capital.

She was lodging in one of the hotel rooms with Edwin Awuku, 42, on January 2, 2020 when the incident occurred at about 1 am local time.

An earlier police report sighted by Dailymailgh.com suggested that the suspect and the deceased were both attacked in an armed robbery case while in their hotel room on that fateful day.

Preliminary investigations have, however, revealed that the deceased was shot and killed by her boyfriend, police in the Ashanti Region said in a statement on Tuesday, January 7.

Police have, however, denied an incident of armed robbery attack in the hotel as widely reported.

Related Topics:KUMASI HOTEL KILLER
Up Next