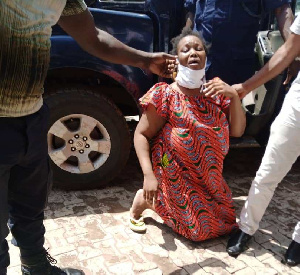 The 29-year-old woman was on May 15, 2020, arrested following a manhunt by the Ashaiman Police that led to the rescue of the 11-year-old boy and 11-month-old girl in Tsiyinu, a village near Afife in the Volta Region.

The convict explained that she was compelled to take the children along with her on her journey after realizing they had followed her to the transport station despite sending them home.

The complaints Tracy Addai and Sandra Ijeme explained that their neighbour disappeared with their children after leaving them in her care. The mother of the 11-month-old girl, Tracy, explained that the convict eloped with her child after handing her over to attend to her chores. The mother last saw the baby playing with the 11-year-old son of Sandra in the convict’s compound.

After several failed attempts to find the children, the case was reported to the Ashaiman Police, where future investigations led to the whereabouts of the children.

The court handed Elizabeth Rockson 8 years in prison with hard labour stating that the convict is a first-time offender.